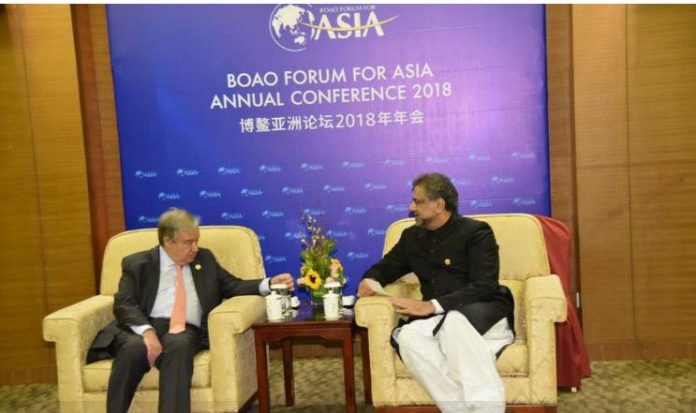 “The premier raised the issue of Indian atrocities in occupied Kashmir during his meeting with the UN secretary-general,” a statement issued by the Prime Minister House said.

PM Abbasi met the secretary-general on the sidelines of the Boao Forum for Asia Conference 2018.

“The use of pellet guns by Indian forces is condemnable,” PM Abbasi told the UN secretary-general.

He further stressed, “Serious dialogue is necessary to resolve the issue.”

PM Abbasi also warned that if India does not stop violations on the Line of Control, then relations between the countries can worsen.

According to the PM House, the UN secretary-general praised Pakistan’s role in the fight against terrorism.

The latest round of clashes between freedom-seeking Kashmiris and the Indian forces has left 19 martyred and 350 wounded. Of these 50 have sustained bullet injuries and 41 have lost vision in one or both eyes due to pellet firings.