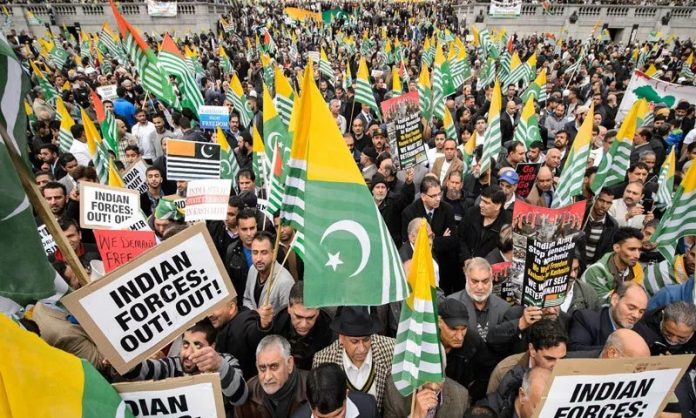 A big protest demonstration led by senior resistance leader, Muhammad Yasin Malik,in Indian occupied Kashmir,  was held outside Jamia Masjid in Nowhatta area of Srinagar, today, against surge in killings by Indian troops in the territory.

According to Kashmir Media Service, the protest was organized by the Joint Resistance Leadership comprising Syed Ali Gilani, Mirwaiz Umar Farooq and Muhammad Yasin Malik. Syed Ali Gilani and Mirwaiz Umar Farooq could not participate in the protest as they continued to remain under continued house detention. However, they addressed the participants of the rally over phone from their residences. The protesters while marching on the streets of Nowhatta raised high-pitched pro-freedom and anti-India slogans.

After the march, Muhammad Yasin Malik while addressing a press conference strongly condemned the detention of Syed Ali Gilani and Mirwaiz Umar Farooq. He said that Indian forces were spilling the blood of innocent Kashmiri people.

He said that men, women and children, who were ordered by the Indian troops to come out of their houses during cordon and search operations, were subjected to identity parade for hours in chilling cold. Yasin Malik on behalf of Joint Resistance Leadership gave the call for a march towards Shopian on Friday to express solidarity with the victims of Indian state terrorism in South Kashmir.

He said that a big protest rally would be held at Shopian Chowk after Friday prayers against the brutalities of Indian troops in South Kashmir.