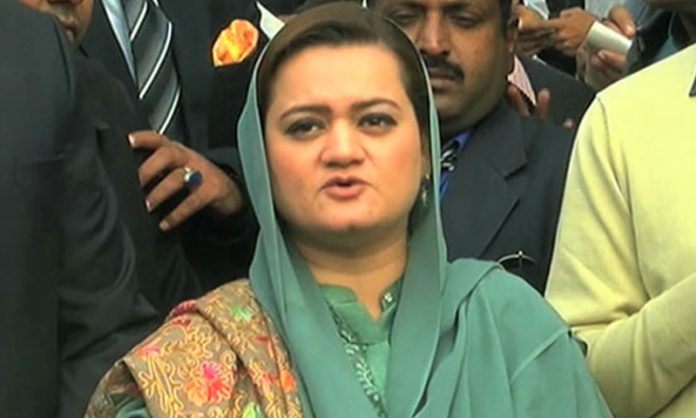 ISLAMABAD: The JIT report, which was inconclusive and a pile of self-generated, uncertified, unverified and un-notified documents, as well as the petitions of the opposition for the disqualification of the prime minister would be rejected by the apex court in accordance with the law and constitution of the country.

The state minister for Information, Broadcasting and National Heritage Marriyum Aurangzeb said this while talking to the media and answering their questions after the Panama Case hearing in the Supreme Court Tuesday.

She said those documents could not be presented in the court of law as authentic evidence under the laws in vogue in Pakistan and the lawyer of the Sharif family had strongly made this point in his submissions before the SC.

The MOS pointed out that these documents were not obtained through the respective governments rather a private detective related to the head of JIT was hired for generating these papers, with the sinister motive to make a case against the prime minister, which was a serious breach of the laws of the country.

These facts she said had established that the reservations expressed about JIT from day one were absolutely correct.

She said these documents were not shown to the prime minister when he appeared before the JIT to seek his response in regards to their authenticity or otherwise which clearly indicated the malicious intentions of the probing team.

Marriyum observed that the prime minister had created history by appearing before the JIT and he would fight till the end for the people of Pakistan.

She said the documents obtained through the detective and other private sources would need to be duly certified and notified by the concerned government as required under the law.

The minister said the JIT had exceeded its mandate for compiling the malicious and scandalous report.

She reiterated that the JIT report was not the verdict of the Supreme Court as was becoming evident everyday and where ever the investigating team had gone beyond the law and the constitution, it would not be admissible in the court of law.

The minister claimed that the JIT as well as the spies hired by it have not been able to point out even a single instance of corruption, kickbacks and commission against the thrice elected prime minister and his family, particularly pertaining to his three stints as prime minister and two tenures as chief minister of Punjab adding that his hands were clean like crystal and he enjoyed the unflinching support of the masses.

Marriyum said the prime minister had never tried to conceal his assets and tax details, which were available on the websites of the concerned government departments.

The minister of state said the prime minister stood for serving the masses which endeared him well to the people of Pakistan who voted for him and would do so again in the ensuing elections to the chagrin of the opposition parties who were trying their utmost to hamper the process of progress and prosperity.

She said they would not succeed in their endeavours and under the dynamic and committed leadership of Prime Minister Nawaz Sharif, the country would soon become free of terrorism, galloping on the road of sustained economic development.

Later in her interaction with the journalists outside parliament house she strongly quashed the impression that the visit of the foreign minister of Qatar had anything to do with the Panama Case.

The minister said all things in Pakistan were not linked with Panama Case adding that it had come down to the work permit and would soon peter away.

In regards to the claims of the opposition of a clash between the workers of the PML(N) and PTI outside the Supreme Court, she said they were also lying in this respect as the charged workers only shouted slogans against each other.

The minister said the political parties and their leaders should advise their workers, like the prime minister, to show restraint to avoid any untoward incident.

Marriyum recalling the behavior of the opposition said it attacked the parliament and hung dirty linen on the premises of the SC besides hurling allegations and lying about the three times elected prime minister during the last four years.

She said as against this the prime minister had shown exemplary sangfroid and patience in facing those allegations which were now meeting their ultimate fate.

The minister expressed the confidence that the SC would also reject their fake allegations against the prime minister.

Responding to a question about the interior minister, the minister of state said he himself would explain his position in a press conference.