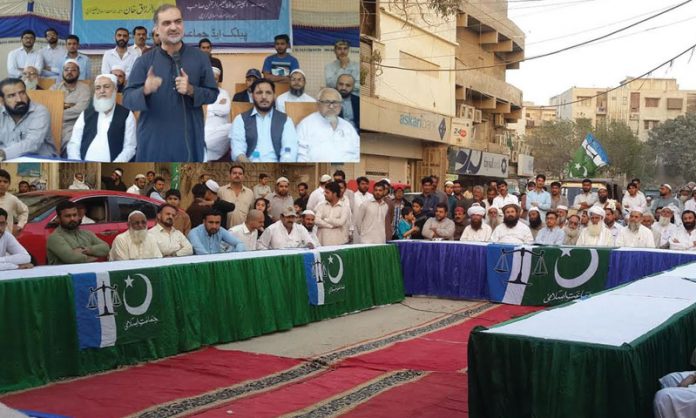 KARACHI: Jamaat-e-Islami (JI) Karachi chief Engr. Hafiz Naeem-ur-Rehman has said that the K-Electric and NADRA irked the life of Karachiites.

Addressing a big “people’s court” held under JI’s Public Aid Committee in Karachi’s metroville area, he warned the institutions of agitation and said that the offices of NADRA and KE would be condoned off, if they failed to deliver.

He said that instead of providing relief and delivering, both the institutions were adding fuel to already burning issues of masses. He said that the JI would continue to pursue the case of masses on all forums.

Lambasting the KE, he said that people have been subjected to overcharging and bogus billing. He said that announced and unannounced power outages have become a routine and there is no proper mechanism for redressal of people’s miseries.

The JI leader demanded of the Federal Interior Minister Chaudhary Nisar to apprehend terrorists, instead of targeting ethnic groups and blocking their computerized national identity cards.

Engr. Naeem said that unfortunately the rulers of this nation have been enjoying luxurious lives on the cost of the generations of poor people. He said that the entire Umma was facing extreme hardships only because of lack of unity.

He appealed Karachiites to get united and added that because of pity differences among groups, the criminal elements forces the entire city to face three decades of lawlessness.

JI district west head also addressed the gathering. He strongly criticized police brutalities against locals. He said that it has become a routine for police to arrest scores of Pushtoon people in the name of operation but just to release them after receiving hefty amounts in bribery.