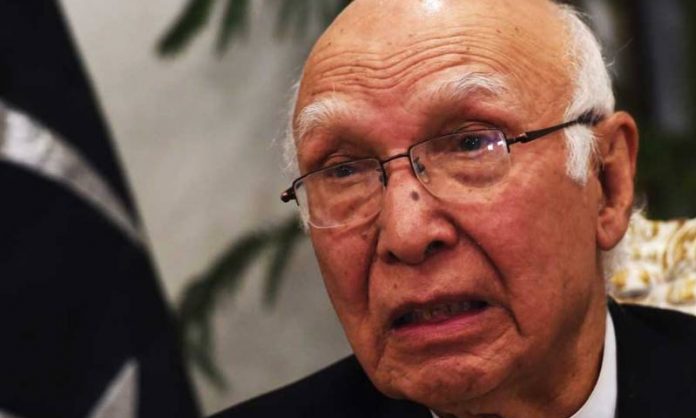 ISLAMABAD: Advisor to the Prime Minister on Foreign Affairs Sartaj Aziz Tuesday, while strongly condemning unprovoked Indian firing over Line of Control (LoC) and Working Boundary, apprised the Senate that the Pakistan’s armed forces were giving a befitting response to the Indian shelling and firing.

By resorting to such tactics, India wanted to divert world attention from the atrocities being committed by its Indian forces in the Occupied Kashmir, he said.

Giving point-to-point implementation report on the 22 recommendations and policy guidelines given by the Senate’s Committee of Whole about the latest Pak-India relations, the Advisor said the government took pragmatic steps and action was already underway on most of the recommendations.

Sartaj said a committee headed by the Secretary Foreign Affairs had been constituted for formulating a double and sustainable India/Kashmir policy.

Another committee led by the Secretary Information had been formed for preparing a fact-sheet and counter-propaganda campaign against India, and design and promote a media strategy for continuously highlighting the Kashmiris’ freedom struggle.