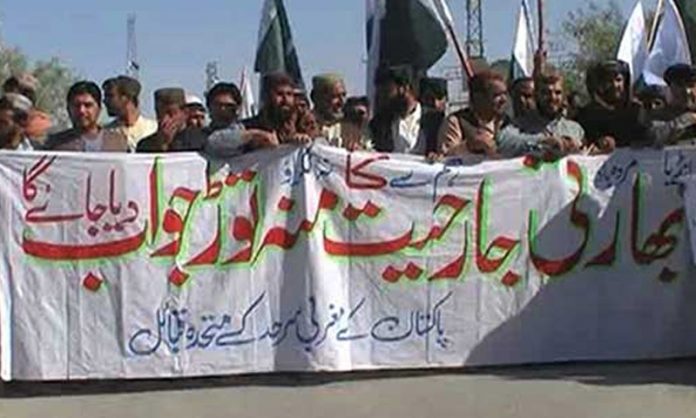 CHAMAN/DERA/DERA BUGTI/PISHIN: In a strong message of solidarity with Pakistan, Pashtun tribes staged a protest  in Chaman against Indian threats and provocative statements made by Indian government officials.

The tribes wanted to send a clear message to India that they stood with Pakistan. The protesters also chanted ‘Pakistan Zindabad’ slogans.

In their address to protesters, tribal elders said Pashtuns would stand by Pakistan Army in case there was any aggression by India.

Protests were also held in Dera Bugti, Pishin  and other areas of Balochistan against Brahamdagh Bugti and Indian Prime Minister Narendra Modi.

The protesters in Dera Bugti strongly criticized Brahamdagh Bugti for his anti Pakistan campaign and seeking help from the government of an enemy country.

They said that Brahamdagh Bugti has no following in the area as people want peace and development.