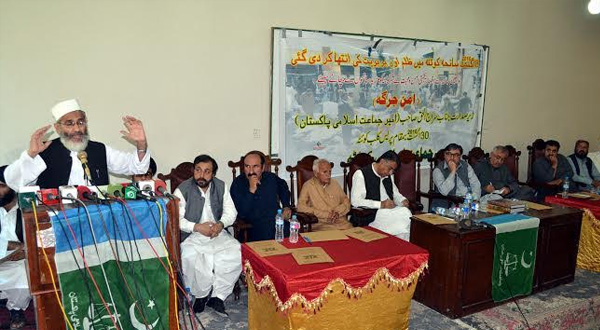 QUETTA: Jamaat-e-Islami (JI) Pakistan Ameer, Senator Sirajul Haq, has said that Balochistan could not be ruled by force and the federal government should change its policy.

Addressing a grand Peace Jirga here, he said that the government should accept the rights of the Balochistan people over the resources of the province and development projects should be initiated to remove the sense of deprivation in the province.

Sirajul Haq said that the Prime Minister should have organized a joint meeting of the civil and military leadership after the Quetta tragedy for preparing a comprehensive plan for peace in the province. However, he said, the Premier did not deem it necessary.

The JI chief said that an operation was going on in Balochistan without administrating anesthesia to the patient and nobody knew how long it would last. He said if a healthy person was taken into operation theatre or Mental Hospital, the patient would cry out.

He said that if the resource rich province Balochistan was having sense of deprivation, the people of the province would not praise the rulers.  He said under article 25 of the constitution, all the citizens had equal rights. Then why the per capital income of a person living Gwadar was only Rs 27 while the per capita income in other cities was Rs. 97, he asked.

He said if the Balochistan people were handed over the resources of the province with authority to use these, they would be able to defend the entire country and no one would call them traitors.

Siajul Haq called for setting up a Commission for Truth for restoring peace in Balochistan.  He said the commission should study all the problems of the province and prepare a realistic report, and in the light of that, the federal and the provincial governments should prepare a plan to solve these problems. However, he said if the local leadership was not taken into confidence, the situation would get more complicated.

He said that the Baloch population and the Pashtoons were two eyes of the province and the national leadership should look at Balochistan through these eyes.