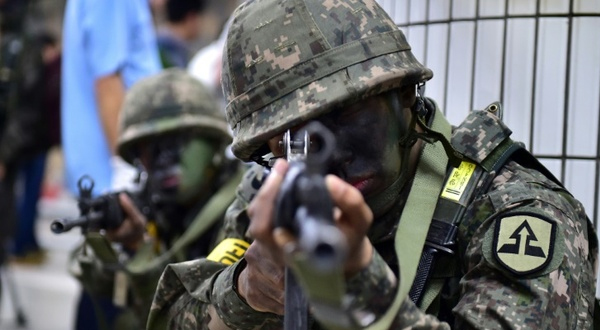 The two-week annual Ulchi Freedom exercise is largely computer-simulated, but still involves around 50,000 Korean and 25,000 US soldiers.  The drill always triggers a spike in tensions on the divided Korean peninsula, and this year it coincides with particularly volatile cross-border relations following a series of high-profile defections.

As the exercise began, South Korean President Park Geun-Hye said the defections signaled domestic turmoil in Pyongyang that could cause North Korea to lash out.     “It is increasingly possible that North Korea may undertake various terror attacks and provocations … to block internal unrest, prevent further defections and create confusion in our society,” Park told a cabinet briefing.

Her comments came a day after the Unification Ministry in Seoul urged all citizens to be on guard against possible North Korean assassination attempts on defectors and anti-Pyongyang activists in the South.