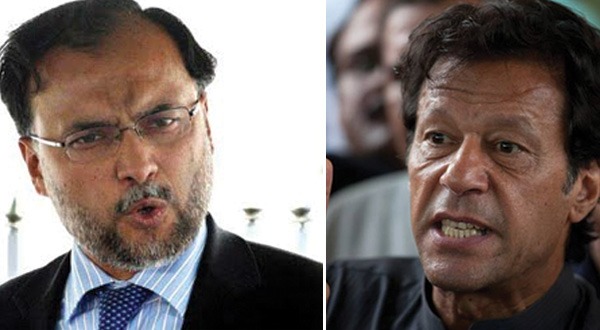 In a statement issued by the ministry here on Saturday, Iqbal advised the PTI chief to play his due role for the prosperity of the country. He said the CPEC project was set to make the economy of the country invincible.

The PML-N leader went on to say that the project should be kept above all politics like the nuclear programme of Pakistan. He said the Chinese companies were investing in Pakistan under the national energy policy.

“All projects are proceeding with transparency…Some elements are objecting to the corridor project out of sheer jealousy.”

The minister also asked Imran Khan to avoid using derogatory language against other political leadership of the country. He said the country was on the path of economic development due to the prudent policies of PML-N government and foreign investors were now taking keen interest to invest in Pakistan.

Ahsan Iqbal said the peace was being restored in the country due to operation Zarb-e-Azb while Karachi operation was launched after the consultation with all the political parties.

He said that the world has acknowledged the efforts and steps of Pakistan in war against terrorism.