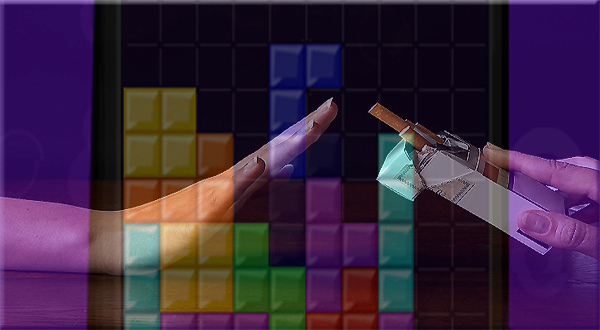 Scientists have discovered the key to stopping cravings for cigarettes and that is playing the Tetris computer game.

Psychologists asked dozens of students to report whenever they felt a craving and how strong the feeling was, before reporting back again in 15 minutes.

Half of the participants were given an iPad to play the block-shifting game Tetris between reports, and they found their cravings reduced by a fifth.

‘We think the Tetris effect happens because craving involves imagining the experience of consuming a particular substance.

‘Playing a visually interesting game like Tetris occupies the mental processes that support that imagery. It is hard to imagine something vividly and play Tetris at the same time.’
Professor Jon May, also of Plymouth University, added: ‘The impact of Tetris on craving was consistent across the week and on all craving types.

‘People played the game 40 times on average but the effect did not seem to wear off.

The boffins from Plymouth University reckon playing the game works because it occupies the same mental processes used to imagine indulging in the craving.

The week-long study, which also involved Queensland University of Technology, Australia, focused on 31 undergraduates, aged between 18 and 27.

“Ninety-five per cent of lung cancer deaths are due directly to cigarette smoking”, according to Dr Desmond Carney, oncologist at University College, Dublin, and secretary general of the International Association for the Study of Lung Cancer.

Men who smoke increase their risk of death from lung cancer by more than 22 times and from bronchitis and emphysema by nearly 10 times. Smoking triples the risk of dying from heart disease among middle-aged men and women.