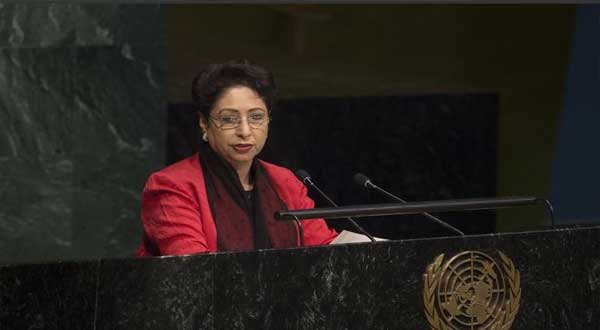 NEW YORK: Pakistan declared at the United Nations (UN) that the architecture of global stability and prosperity cannot be built on injustice and denial of the rights of the Palestinian people.

Pakistan’s Ambassador to the UN, Dr Maleeha Lodhi urged the Security Council to live up to its obligations and responsibility, and summon the political courage and vision to adopt a resolution with parameters and timelines for ending occupation.

Speaking at a High-level Conference “Sustaining Human Development and Protecting Rights of Palestine Refugees” Pakistan’s Permanent Representative appreciated the commitment of UN Relief and Works Agency (UNRWA) for Palestine Refugees to protect the rights of these refugees and being in the forefront in providing services, despite hurdles created by Israeli occupation forces.

She recalled the destruction of UNRWA schools being used by those displaced during Israel’s military assault on Gaza in summer of 2014.

In addition to its annual contribution, Pakistan provided additional assistance to UNRWA for reconstruction and rehabilitation in the aftermath of the conflict in Gaza last year.

Ambassador Lodhi called upon the Security Council to take action to end occupation. She added, “This is also the only sustainable way to help UNRWA’s work in the long term”- PID