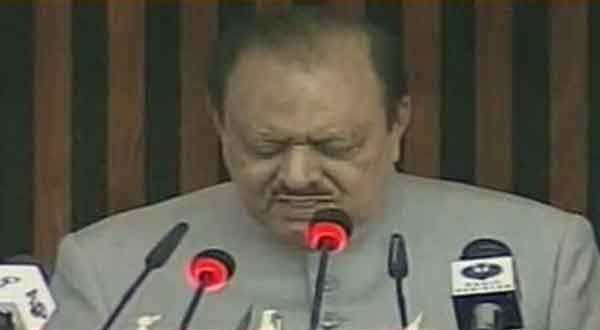 ISLAMABAD: President of Pakistan Mamnoon Hussain said that operation Zarb-e-Azb will continue till the elimination of last terrorist, whether they are in FATA, Karachi, or elsewhere.

In his address to the joint session of the parliament, the President first congratulated the parliamentarians for another successful year of a democratically elected house and vowed for another time that the operation against terrorism in the country will be intensified till the elimination of the menace from the country.

The President maintained that the dream of development of Pakistan cannot be realised until the establishment of durable peace in the country.

About Pakistan’s relations with the regional countries, He expressed pleasure over Afghanistan’s current government’s show of confidence in Pakistan while stressing upon the neighboring India to resolve the Kashmir issue according to the will of the people of the valley.

He expressed pleasure over Pakistan China Economic Corridor and the friendly country’s huge investment in Pakistan by calling it a historical achievement.

Water and Power issue were the main highlights in the President’s address after terrorism. Mamnoon Hussain said that people of the country will witness and end to loadshedding by they year 2018 while raising alarm over an imminent shortage in water reservoirs.

The President lamented that Pakistan is facing a ban over polio while those responsible for the epidemic were also involved in spreading terrorism in the region.

President assured the World that Pakistan will not allow the virus to spread and cripple more people.

Elimination of terrorism being the biggest highlight of the speech, Hussain expressed hope that the government’s efforts against terrorism will bring more cricketing nations in Pakistan.

He went on to say that one day Pakistan will host international sporting events.

MQM staged a walkout from the session during the President’s address.