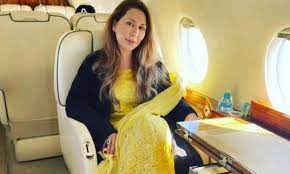 A defamation notice has been issued for broadcasting false and fabricated news about Imran Khan and Farah Khan,  stating that Umar Farooq never met nor Farah Khan had any role in selling the watch. Under a well-thought-out conspiracy, fabricated and baseless allegations were made. Ahmed Noorani has also explained in his story that Farah Khan did not travel to Dubai in 2019.

The text of the notice states that the allegations are intended to damage reputation. Apologize or explain within 7 days. If you do not apologize, a defamation claim of Rs7 billion will be filed.

The anti-graft watchdog had summoned Farah Gogi and 10 others including her mother Bushra Khan in an inquiry pertaining to money laundering and assets beyond means.

She submitted the response on behalf of all suspects through her lawyer.