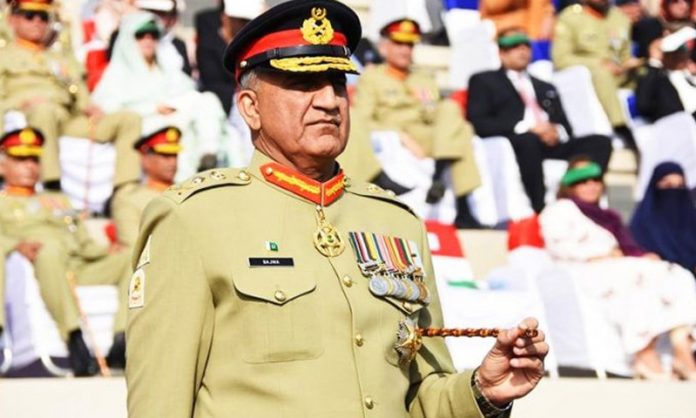 DUBAI: Army Chief General Qamar Javed Bajwa says that the Pakistan Army will remain steadfast in its decision to remain apolitical despite propaganda and false narratives.

General Qamar Javed Javed said that the army will remain firm on its decision to remain non-political despite propaganda and false narratives. The non-politicization of the army will promote political stability in Pakistan.

The army chief further said that the non-political nature of the army will strengthen its relations with the people.

According to the Public Relations Department, a certain group has maliciously attributed  family’s assets of General Bajwa to hm, giving a false impression that these assets were made by his family during the 6 years of General Bajwa’s tenure.

Earlier, Finance Minister Ishaq Dar shared on Tuesday that he has received the interim report related to the leak of Army chief General Qamar Javed Bajwa’s income tax records, adding that they have traced some people involved in the act.

“I have seen the interim report. I hope to receive the final report today,” Dar told the host during today’s show. He added that the government has found a few people behind the leak and the issue will reach its logical conclusion.

Earlier, the Ministry of Finance has taken strict notice of the illegal leak of tax details of Army Chief General Qamar Javed Bajwa and his family.

In a statement released by the Ministry of Finance, it has been said that Finance Minister Ishaq Dar has taken serious notice of the illegal leak of tax details of Army Chief General Qamar Javed Bajwa and his family.

According to the statement, Finance Minister Ishaq Dar termed the leak of tax details as a clear violation of the law and ordered the FBR to investigate the matter immediately.