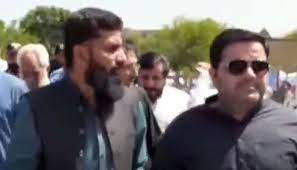 ISLAMABAD: Two members of National Assembly of Pakistan Tehreek-e-Insaf (PTI) have been arrested in connection with the cancellation of bail in Sindh House attack case.

The court, after hearing the arguments of the parties, canceled the interim bail of PTI MNAs Ataullah and Fahim Khan.

Police arrested two PTI MNAs from outside the courtroom after the court canceled their bail.

Talking to Geo News, Federal Interior Minister Sheikh Rasheed said that the incident at Sindh House was regrettable and condemned it.

He termed the incident as illegal. He said that the protesters were taken out of the Sindh House. The real problem is March 27 but it has already before that. It is a disturbing situation, it should not have happened, apparently the situation is going in another direction.